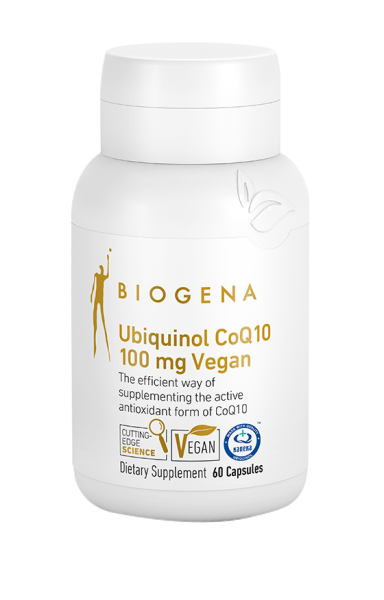 The efficient way of supplementing the active antioxidant form of CoQ10

Coenzyme Q10 (CoQ10) is a vitamin-like nutrient that is naturally present in all human cells, with the highest concentrations in the cells’ powerhouse, the mitochondria. The body produces two different forms of CoQ10: ubiquinone and ubiquinol. While the ubiquinone form must first be converted into ubiquinol, ubiquinol is directly active and utilized by the body. In the blood plasma of healthy young people, the activated form ubiquinol makes up more than 90% of total CoQ10. CoQ10 plays a key role in energy production and is found especially in tissues and organs with high energy requirements, such as the heart, liver, kidneys and muscles. Clinical studies suggest that CoQ10 has benefits for the cardiovascular system – supporting heart muscle function and healthy blood flow. Furthermore, the fat-soluble nutrient is one of the most significant lipid antioxidants, neutralizing free radicals and preventing cell damage. As we age, production of CoQ10 declines. Fortunately, your body does not have to rely solely on its own production but can also obtain CoQ10 through diet and supplements.**

Biogena Ubiquinol CoQ10 100 mg Vegan GOLD is the efficient way of supplementing ubiquinol, the active antioxidant form of CoQ10. This unique custom-made product is characterized by its excellent combination of high-dose ubiquinol with vitamin B2 (riboflavin), which is necessary for energy metabolism, vitamin E to protect cells from oxidative stress and the phospholipid lecithin from sunflowers.**

Biogena Ubiquinol CoQ10 100 mg Vegan GOLD uses a patented, premium raw material of Ubiquinol made by Kaneka. Kaneka Ubiquinol™ is a nature-identical ubiquinol, which has been tested and researched by scientists and researchers for more than a decade. The raw material is also characterized by its particularly high stability and is carried in a vegan liquid capsule of coconut and sunflower oil with sustainability certificate.

** These statements have not been evaluated by the Food and Drug Administration. This product is not intended to diagnose, treat, cure or prevent any disease.